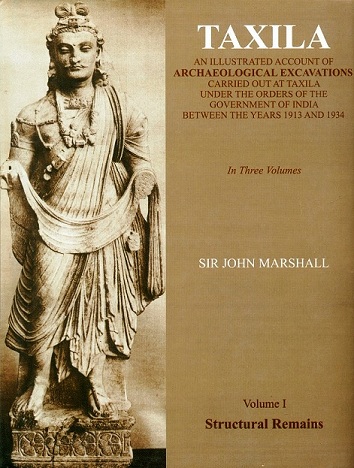 Taxila, 3 vols.: an illustrated account of archaeological excavations, carried out at Taxila under the orders of the Government of India between the years 1913 and 1934

This reprint has been produced from the 1951 Cambridge edition in its original size. Every care has been taken to reproduce the inscriptions etc. to match the clarity of the original work. This exhaustive work, based entirely upon excavation and research, covers the history of the North-West of India for a thousand years-from the sixth century b.c. to the fifth A.D.-and embodies the results of 22 years of labour on the site of Taxila itself. Taxila, which was the most important city in the Panjab and North-West, is the only city of the historic period of India that has yet been systematically excavated, and the results achieved revolutionise our knowledge of the material culture and economic condition of the people, and bring out with remarkable clearness the changes wrought through the successive conquests by Persians, Greeks, Scythians, Parthians, Kushans and Huns. They are also specially valuable for the light they throw on the Parthian rule in India during the first century A.D. The materials dealt with are diverse and voluminous; for apart from the array of buildings unearthed and now standing in situ-fortifications, palaces, houses, temples, monasteries-they comprise large collections of domestic utensils and implements, arms, sculptures, jewellery, coins, gems and inscriptions. The work has been undertaken under the auspices of the Government of India. It consists of two volumes of text and one of plates.;CONTENTS: SIR JOHN MARSHALL; List of Text-figures; List of Tables; List of Abbreviations; Preface: 1 TOPOGRAPHICAL - Appendix: Shrines A and B at Mohra Maliaran; 2 HISTORICAL - Appendix A: On the supposed representation of the Buddha on Saka coins; Appendix B: Indian Universities - Chronology of principal events connected with the history of Taxila; 3 BHIR MOUND; 4 SIRKAP; 5 SIRKAP (continued); 6 SIRKAP (continued); 7 SIRKAP: MAHAL; 8 SIRSUKH; 9 TEMPLE OF JANDIAL; 10 THE DHARMARAJIKA; 11 THE DHARMARAJIKA(continued); 12 REPORT ON THE HUMAN REMAINS FROM THE DHARMARAJIKA, by B.S. GUHA, M.A., PH.D., S. SARKAR, M.SC., and H. K. BOSE, M.SC 13 KHADER MOHRA, AKHAURI, etc: 14 KALAWAN; 15 GIRI; 16 STUPAS OF KUNALA AND GHAI; 17 MOUNDS A AND B AT JANDIAL; 18 MOHRA MORADU; 19 PIPPALA; 20 JAULIAN; 21 LALCHAK; 22 BHAMALA;